The turnkey project included four Rhoss TCAEBY 296 ASP1 packaged air-cooled chillers, each with a cooling capacity of 90kW. The modular chillers are equipped with integral primary pumps and buffer vessels, and Klima-Therm supplied secondary pumps and ancillary equipment for the project.

All logistics were managed by LH plc, which included dismantling and removal of the existing system, installation of new pipework and electrics, craneage for the new plant and full project management. 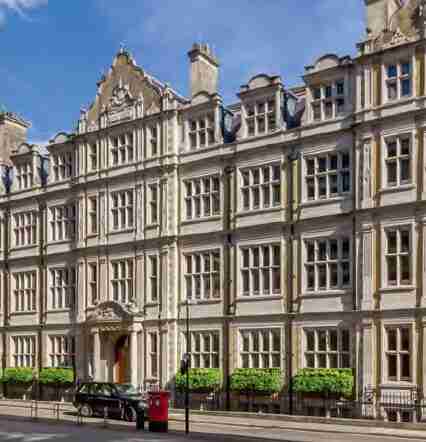 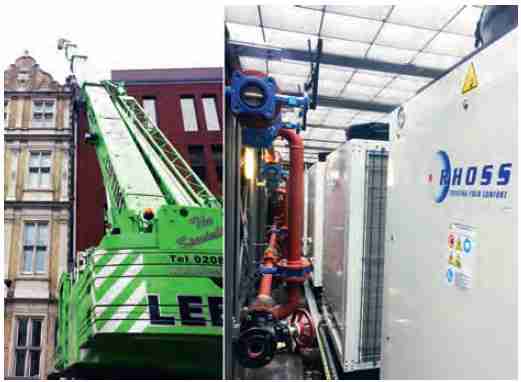 The high specification building, operated by London Executive Offices, provides high quality commercial office space that can be rented on a short or long-term basis. The previous air conditioning had proved unreliable and subject to evaporator freezes, leaving the building without effective cooling. The owner wanted a new reliable and efficient system to ensure high quality and comfortable conditions for tenants, which would be easy and cost-effective to maintain.

It also had to enable the building to meet the new Minimum EnergyEfficiency Regulations that make it unlawful from April 2018 to let properties with an energy performance lower than a statutory minimum standard.

The LH/Klima-Therm solution was to strip out the two existing chillers and replace them with four smaller high performance Rhoss units, giving much greater resilience.

The existing plant, consisting of two ageing chillers, was installed in a confined enclosure on the roof, in compliance with Grade II listing requirements. This included an open grid structure over the chillers which could not be modified, severely restricting headroom.

The LH/Klima-Therm solution was to strip out the two existing chillers and replace them with four smaller high performance Rhoss units, giving much greater resilience. The integral pumps on the new chillers feed into a new low loss header. The project involved installing a new secondary pumping system, installed where the primary pumps were previously, and a new pressurisation unit. The new system was “daisy-chained” into an upgraded BMS using Rhoss’s built-in sequencing capability.

All lifting work had to be completed in a single operation, including removing and refitting the open grid roofing and the related bird netting. The order of lifting had to be meticulously planned since much of the pipework would be inaccessible with the new chillers in place.

The solution was to strip out the two existing chillers and replace them with four smaller high performance Rhoss units, giving much greater resilience.

The modular chillers are equipped with integral primary pumps and buffer vessels.

Talk to an Expert

With a complete range of air-conditioning and refrigeration equipment, LH Plc can provide a solution that works for you, your building and your budget. Please send us a message using the form.